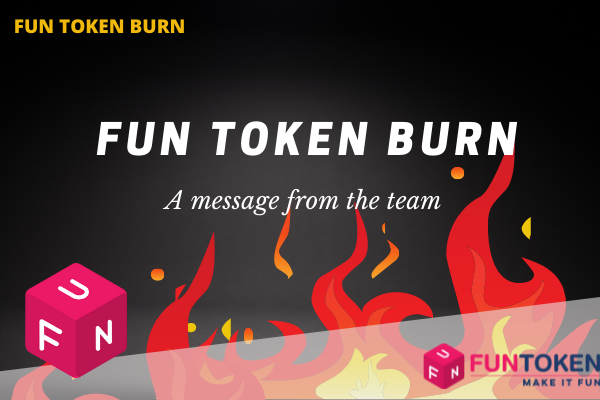 We’re proud to announce that we completed our first token burn ever.

This is a significant milestone in what promises to be a long but
fruitful journey.However, we have noticed our users raising a number of
concerns and we’d like to address them.

We promised to allocate 50% of all in-house gaming profits to burn FUN
Tokens. We launched DPLAY four weeks ago and we can already boast
over 53,000 users. This allowed us to generate sufficient revenue that we
could burn 5 million tokens.

However, this is just the beginning. DPLAY is only going to grow bigger,
and we have a slew of potential gaming operations planned for the future.
It’s 5 million tokens today; with every quarterly burn, this figure will keep
rising higher as FUN Token grows and expands further.

Furthermore, XFUN, the new Layer-2 counterpart to FUN, has been
released on the Polygon network. A soon-to-be-launched FUN/XFUN
Bridge will allow users to swap FUN for XFUN.

For every XFUN swapped, the exchanged FUN will be escrowed and
taken out of circulation, thus acting as an effective dual asset deflationary
mechanism. This will prove to be a massive addition to the scheduled
quarterly burns.

This is just the beginning. Your support has brought us here and we hope
we can count on it as we move forward.